I once read that a pearl starts out as an intrusive irritant, like a grain of sand, entering the shell of an oyster. As a form of protection it is gradually coated in layer upon layer of richly lustrous nacre, turning and swirling until it becomes a pearl.  String Of Pearls is about getting through difficult things, defiantly transforming them and coming out on top.  It’s a pep talk to a self that’s struggling through challenges. A reminder that the struggle can make beauty too. 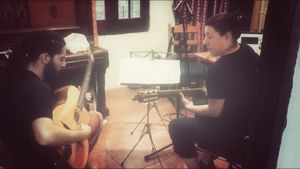 The first lines to this song “I’ll grow a pearl, this grain of sand got under my skin/if I evolve, revolve and spin/I’ll grow a pearl” I’ve been sitting on for years.  They were hiding in my scribbly box of ideas.  Initially, I imagined it as a kind of down tempo trip-hop electronica thing.  Things come to me that way a lot.  And of course, here I am, a folk singer, so that’s where they usually end up.  This time, however, I’d just gotten back from a trip to Montevideo where Fernando Rosa intuitively saw the Jazz Manouche potential in a couple of the songs we were working on. He called in his friend Federico Brann, a Tango and Jazz Manouche guitarist, to try this out, and hearing him play reignited my excitement for Django Reinhardt's infectious rhythmic style, chord shapes, and improvisation.

As I began studying La Pompe (the guitar rhythm style that swings so wonderfully), and learning the chords to Minor Swing, I came back to these lyrics, remembering the melody and chord movement that I’d imagined with them.  I was able to apply the chords I was learning to the tune, and it suddenly had a whole new life.  I finished the lyrics quickly.  It didn’t feel like it needed a lot, and I wanted room for improvisation. When I debuted it during a backyard bbq with friends, it felt so good!

I got a few lessons from Debi Botos, a young, awe-inspiring guitar player in the Toronto community, exploding with the musicality of her Hungarian Romani roots and a studious depth of understanding of Django’s jazz.  I asked her to come in and record a demo of the tune, and she nailed it right away.  I recorded her with one Peluso 414 in my little garage studio and she played both the rhythm and the lead track, with me just switching the mic position on each to change the colour a bit.  We thought we were just making a demo, but her parts stuck.  Co-producer David Travers-Smith was able to use them as the basis for the final track.  Meanwhile on the ground in Montevideo, Fernando had Clarinet in mind, and asked Fabián Pietrafesa to apply his smokiest film noir imaginings to his performance. Tony Spina sent us drums from Montreal, Rachel Melas added the bass here in Toronto, and finally in came Mark Duggan with the vibraphone, taking it to a whole new level of sonic nostalgia.  Like in Belleville rendez-vous, I had a blast coming up with the back-up vocal arrangements, imagining them as ghostly emergences from an old radio, and getting feedback from more than one source that they evoked the radiator lady in the David Lynch film, Eraserhead. 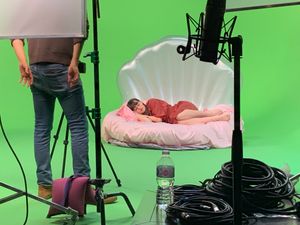 For the video, it was our first time working with Carlos Coronado, who has been directing the official videos and lyric videos for this album. We made it with a green screen in a Toronto studio.  He envisioned a woman waking up in an oyster shell and moving through various challenges, transforming tough experiences into pearls along the way in a magical-realist, almost comic-book form. We also wanted to evoke the slightly sped-up visuals of old, silent films. Carlos skilfully integrated all the suggestions that Ximena and I excitedly offered as we figured out the scenes.  Carlos cast most of the crew, with Holly McCourt starring in the lead role as the young woman facing it all.  She is a stellar, hard working actor and I’m so glad she agreed to jump on board.

The one actor we recruited ourselves is the negligent sound guy, who's a dad at my daughter’s school and is actually a very lovely person - I just wanted that moustache in there!  The benevolent psychic was a character based on my dear friend Jordi Rosen, a fellow songwriter and professional empath who has more than once helped me view life’s strange turns through a lense of possibility and positive change.

Perhaps the crux of this video, and song, is the sharing of the story of my late-deafness in a light-hearted way. It’s a challenge that has deeply shifted me, but the glowing pearl of it all has been the dedication to a quieter life that focuses on connection to my family, home space and health, which definitely has a pearly glow.  I am also determined, when I finally get back to live shows, to tour in a way that feels sustainable and healthy.   As one of my booking agents, Rebecca Anderson, recently reminded me, kindness needs to be at the core of everything. With all these working relationships and personal relationships that make life go, we need kindness towards each other and kindness towards ourselves.  And in the meantime, it’s fun to imagine using our magical powers to turn life's difficult experiences into magical pearls to use as fuel for our transformation into butterflies.